Last Friday in class we reflected on Rembrandt’s Return of the Prodigal Son, and I saw a fresh flash of beauty that has escaped me for a lifetime.  (Don’t you love it when God does that!?) 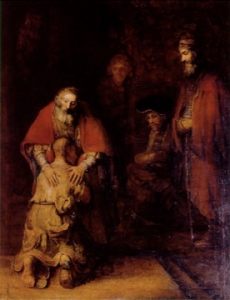 For the past thirty years I’ve been reading the Prodigal story and asking myself which character I am most like: the ungrateful, younger son of rebellion, or the iron-hearted older brother with an attitude,  (pictured standing at the right).  Sadly I invariably conclude that I have been and will likely continue to be a mixture of both.  But the point I saw on Friday is that we are to be like neither, but like the Father, filled with excruciating compassion and yearning for the return of the boy.  It’s a story about love, tenderness and mercy, and we are to be ever scanning the horizon with the Father in hopeful anticipation of prodigals.

But the real zinger came three days later when Vishal Mangalwadi explained to us: (this will be a loose quote)

“The Moral Majority in America became the moral minority because it had the spirit of the older son, and not the spirit of the Father.  Many of the America’s prodigals know they are squandering their father’s wealth, but they would rather live in a distant land than to return to the home of the older brother.”

I wanna be like my Father: broken-hearted and waiting at the door without an ounce of judgment. 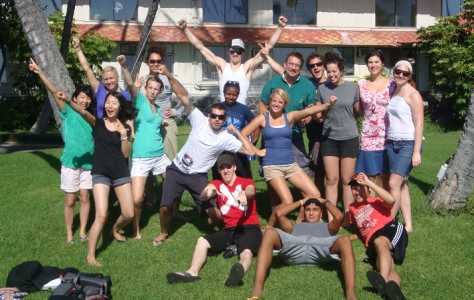 A few our our Justice DTS students helping me celebrate my birthday.