Back in the early seventies I learned at a liberal denominational youth conference that life is really “all about sex.”  No kidding.  One dear counselor casually unpacked the idea that all our relationships, all our dreams, and all our motives were merely hormonal spark plugs firing in our adolescent bodies.  It was so jarring to my impressionable mind that I could barely concentrate on Kum Ba Yah for the next couple of days, until another man stood up and spilled the real beans:  It wasn’t about sex after all.   It’s about racism and the struggle for equality among people.   I didn’t understand at the time that I was being bombarded with worldviews, and non-biblical ones at that.  These were ideas that fell like a fog around my mind. 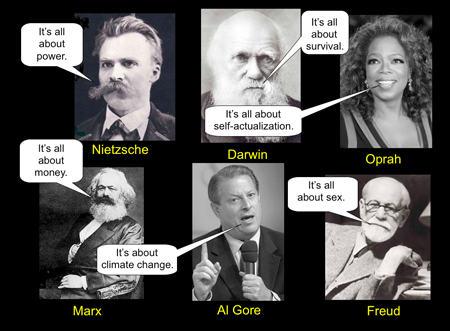 A worldview is a story line we believe about the world, an over-arching idea that organizes our experiences into a meaningful whole.  If life truly is about hormones, then that explains a few things about why I do the things I do.  But if it’s about racism, then it explains other things.  Virtually everyone  believes some sort of story about the world.  It’s nearly impossible to live in a world of random pieces which cannot be assembled into a story line.  Marx’s story was about wealth and freeing ourselves from the damnation of capitalism.   Margaret Sanger’s story is one of sexual liberation and emancipating ourselves from old fashioned morality.   Timothy Leary told a story about the promise of drugs and flower-power to redeem the world.

But of course the real question concerns the truthfulness of the story we believe.  Any old story will do to a point.  But only the True story will bring all the pieces together into a coherent whole.  And of course the only person who can verify the correct story is the Author who brought it all into being in the first place.   “Once upon a time”, (“In the beginning”), is the platform upon which the whole story will be built, and if we begin on a faulty foundation it’s a sure bet the whole system will crumble at some point.

Modern Western education is a house built on the sand of a false beginning.  It’s all well and good to fill young minds with stories of man’s descent from primates until you expect him to act like a human being, and not steal the banana you brought for lunch.   It all works well enough until those eighth grade primates begin to actually believe the idea that there really is nothing special about being human, and succumb to depression and suicide.  Who’s to say we should work and not live off the government?  Who’s to say we shouldn’t cheat our way through school?  Who’s to say we shouldn’t accept bribes or steal the neighbor’s vegetables from his garden?   Because if it’s all about sex, money, power, drugs, climate change, racism, or tolerance, then I’ve got quite the latitude to invent any old story I choose.  And society begins to crumble.