When Jesus announced his mission in the synagogue in Nazereth, (Luke 4: 14-30), he declared a kingdom that would transform the world.   God’s dream encompasses all creation from streets to stars, from jails to juries.  E. Stanley Jones expressed it succinctly: “The Kingdom is God’s total answer to man’s total need.”

Yet at the beginning of 2010 the tragedy, in the words of G. K. Chesterton is that “The Christian ideal has not been tried and found wanting. It has been found difficult; and left untried.” Of course the gospel of forgiveness has been embraced by countless generations of glad people, but the gospel of the Kingdom has barely been taken off the shelf.

I want to initiate a little series here at the beginning of the year that will address the kingdom in regard to business, government, education and the “rest” of life.  It’ll take awhile to work our way through, (and I’ll almost certainly take some detours along the way), but I’m excited about the discoveries we might make in the process.  Not only will this help me to order my own thoughts, but hopefully it’ll help some others to grasp the Kingdom in a more concrete way.

Back in 1975 God spoke to three Christian leaders independently of each other about the imperative of reaching the seven “spheres” of society.   Loren Cunningham, (founder of Youth With a Mission), Bill Bright, (founder of Campus Crusade for Christ), and Christian thinker Francis Schaeffer were each impressed by the Spirit to begin focusing on raising a generation to reach these seven spheres with the truth of Christ and His Kingdom.  It wasn’t about Christians “taking control” of culture, (for the Kingdom is never a matter of “control”), but about serving and influencing these strategic spheres with humility, insight, and love.

Lets begin by having a look at these spheres: 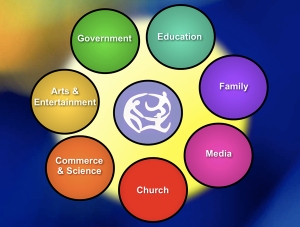 “The same one who came down is the one who ascended higher than all the heavens, so that He might fill all things.” (Eph. 4:10)  The seven spheres include Education, Family, Media, Church, Commerce, Government and the Arts.

God’s kingdom plan is to bless the human race and to reveal his staggering beauty in each of these seven areas!   But the great tragedy of today’s gospel is that in forgetting the kingdom we have focused the spotlight almost entirely on the individual and the church.  And this in turn has banished the rest of life to the shadows, beyond the scope of God’s grace. 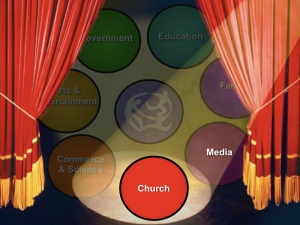 The consequence is a Christianity that is largely expressed within the brick and mortar walls of a church building while the rest of the “real” world slides quietly into darkness.   What are we to do?  What does the gospel have to do with media, classrooms, governments and Wall Street ?   I hope you’ll join me in the weeks to come as we try to shed some light on the missing pieces of the Gospel.

3 thoughts on “Tracking down the missing pieces”